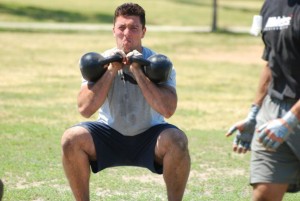 I am assisting Senior RKC Josh Henkin, and he calls me up to demonstrate what’s called a “dynamic isometric” squat.

This is VERY tough – but highly effective – version of the kettlebell squat.

Here’s how to do it:

— The movement is very precisely controlled from beginning to end

— At this time you in essence are doing a very slow eccentric (negative) contraction. Typically, it is done for a slow count of four. During this time, you lower the weight approximately 3-4 inches.

–After the four count, you stop and hold the position for a count of four. You then again very slowly lower the weight another few inches on a count of four and then again hold for four. This is repeated up to four times.

— After holding in the bottom position, you explode out and come up as fast as possible.

The dynamic isometrics technique can be used in other exercises as well. You could use it in a kettlebell press, or even a push up or a pull up.

And according to recent research from the Journal of Strength and Conditioning Research, there is a strong correlation between performing isometric squats and strength and explosiveness – so it’s a great thing to think about adding to your routine!

Give that technique a try, and let me know how it goes 🙂

And, if you are interested in a full 8 week training plan to help you gain strength and muscle using isometrics – with OR without weights – be sure to check out my friend Todd’s Isometrics Strength Course HERE – it gets my highest recommendation.