One of my favorite ‘same-but-different’ kettlebell exercises is the Kettlebell Overhead Lunge.

Why is it ‘same-but-different’?  The movement is very much like a portion of the Turkish Get Up – so it should be familiar to you – but it’s performed in a different fashion and provides a unique challenge.

Watch the video for detailed description and demonstration of the exercise, then check out the recap section below:

Add the kettlebell overhead lunge into your kettlebell exercise mix today for a new challenge and increased results!

P.S. If you liked this post, make sure to sign up for the KettlebellBasics.net newsletter – you’ll get KB training tips and tricks just like this one delivered straight to your email inbox every week (AND a free copy of my Beginner’s Guide to Kettlebell Training).  Just drop your name and best email into the box at the upper right of the page to do so now.

Pavel Tsatsouline, along with many other folks involved in the RKC school of strength, is/are by far my biggest influence(s) in kettlebell workout design, kettlebell exercise technique, and overall kettlebell training philosophy.

However, there’s also big world out there that exists outside of the RKC … and being open minded to new training concepts and ideas is part of being the best trainer you can be.

Craig Ballentyne of TurbulenceTraining.com is someone I highly respect and follow closely when it comes to training advice and innovative workouts. I actually use ideas and exercises from a variety of Craig’s programs for my training clients’ and own personal workouts at least every week, if not every day.

Here’s a video from Craig where he outlines and demonstrates a killer kettlebell, body weight and stability ball circuit workout:

This kettlebell, body weight and stability ball circuit workout consiststs of 10 exercises performed for 20 reps each as fast as possible. A few notes on the exercises:

Metabolic conditioning – style workouts like this one from Craig Ballentyne of TurbulenceTraining.com are great for losing fat, gaining lean muscle and sending your conditioning level through the roof.  Enjoy the pain!

P.S. If you liked this workout, you’ll love the KettlebellBasics.net email newsletter … sign up by dropping your name and best email into the box at the upper right of the page and you’ll get new workouts, videos, and training tips like the one(s) in this article delivered straight to your email inbox each and every week!

As an incentive to get folks into my training studio, and to let them ‘try before they buy’, so to speak, I offer prospective new clients a complimentary trial session – they get to tour my facility and go through a short sample workout.  I’ve built my personal training and boot camp business around using this offer to get new clients in the door –

During this initial trial workout, I usually can tell within 60 seconds or so (many times even less) a person’s athletic ability, training experience, fitness level etc. One of the big indicators is their ability to effectively produce muscle tension/tightness during an exercise on cue.

Take a simple squatting movement for example:  Can the individual maintain midline stability – keep their chest up, shoulders back, and flat back – or do they collapse, round their back and loose tension in their core when they attempt the exercise?

In my opinion, the #1 kettlebell strength building skill is the ability to produce muscle tension and tightness during exercise. This ability will make you instantly stronger, will protect you from injury, and is transferable to many other strength activites.  Let’s further elaborate on each of these points:

The ability to tense and contract muscles in your body on cue can result in instant strength increases.  The basic idea (covered beautifully and in much further detail in Pavel’s The Naked Warrior) is that the average person only contracts 20-30% of their muscles when trying their hardest; learning to effectively recruit muscle tension helps you use more of your available strength at any given time.

An example of this phenomenon is the mother who ‘activates’ a large percentage of muscle fibers (through adrenaline and other stress hormones) to lift a car off of her trapped child – but ends up ripping tendons and breaking bones in the process.

2. Muscle contraction – specifically the ability to brace the ‘core’ – protects you from injury

Relaxing your core during a heavy lift and losing your midline stability not only makes you weaker but it also makes you more susceptible to injury.  The core musculature is the like the body’s natural weight belt – and you’re in trouble if you don’t know how to use it.

3. Muscle tension techniques are transferable to all strength activities

Learning how to create maximal muscle tension at the right time is helpful for all strength activities – whether you’re doing pistol squats or heavy deadlifts.  And if you learn how to activate extra muscle and strength while performing, for example, a simple body weight – only push-up exercise, these techniques can be applied the next time you attempt a heavy kettlebell press.

Start by placing yourself in the down position of a push-up and and tense all of your muscles together before pushing up. If you practice once without pre-tensing and then practice again after pre-tensing all the core muscles you will see the huge benefit that developing maximal muscle tension in an exercise can give you.

The ability to effectively produce muscle tension at just the right time is critical for getting the most out of your kettlebell training. You’ll get stronger, protect yourself from injury, and be able to transfer the skill to all types of strength training. Train hard and talk soon –

P.S. To learn more about tension techniques I discussed in this article, a great resource is the Naked Warrior by Pavel. The book is about getting strong using your own body weight, but the techniques he talks about are very easily applied to kettlebell training. For more info about the program and to order a copy of the book and/or DVD, click the link below:

By far, the most popular posts on this blog are the free kettlebell workouts I share on a regular basis …

An important point to keep in mind, though, is that perfecting your kettlebell training technique should come before you start changing up your workouts.

I just went through and updated the kettlebell exercises page with 13 new articles on learning and perfecting all the basic kettlebell drills … click the link below to check it out:

Keep lifting hard and talk to you soon!

P.S. Make sure to sign up for my weekly newsletter if you haven’t yet … you’ll get new kettlebell training tips just like these delivered straight to your email inbox every week, PLUS a free copy of my ‘Beginner’s Guide to Kettlebell Training’ just for signing up! Drop your name and best email into the box at the upper right hand corner of the page to do so now.

It’s early Monday morning … I’m on a return flight from Minnesota to California … I’ve survived the RKC weekend and am officially certified!  I’m more excited about kettlebell training than I’ve ever been … my head is overflowing with kettlebell knowledge and I’m ready to conquer the world …

Later that day I returned to my facility to work with a few private clients and lead a couple of boot camp classes.  And I quickly realized that I still had a lot to learn about teaching kettlebells … particularly in a group setting.

Over the last 3.5 years, I’ve continued to learn more about kettlebells every day through written and video instructon … I completed my level 2 RKC certification last year … I’ve attended multiple other kettlebell workshops and events … and I’ve personally led about 15 kettlebell-based boot camps per week in that same time frame.  Moral of the story is that through these experiences, I’ve learned a lot about what works and what doesn’t in a kettlebell boot camp setting … so whether you’re training with KB’s by yourself at home, or you’re a current/inspiring boot camp instructor, I’m confident that the kettlebell boot camp workout “best practices” in this article will help you get better results!

Especially if you’re dealing with folks at different ability levels, you must choose your kettlebell boot camp exercises carefully.

For example – the Turkish Get Up can be a tricky move to use with a large group, particularly if you have folks that are unfamiliar with it. There are a lot of steps and elements involved with getting the movement right.

As an alternative, I typically use the 1/2 Get Up in a boot camp setting.  It’s much easier to teach and keeps the workout going much faster:

2. Structure the order of the kettlebell workout carefully

This goes for any kettlebell training session really … but is particularly important in a boot camp setting.

For example – if you’re going to be using exercises that anyone in the group is unfamiliar with, consider building them into the warm up period so they’ll have a chance to practice good form at a less-than-100% speed.

Another example would be placing highly technical moves – like the long cycle clean and jerk or viking push press – towards the beginning of the workout when participants are freshest both mentally and physically.

I’m a big fan of kettlebell workout “finishers” (BTW, you’ll learn more about this concept very soon, I have a cool new program and more info on the topic that I’ll introduce to you next week) …

But as an example, maybe this is what your kettlebell boot camp workout has looked like so far:

Now, as a ‘finisher”, you include the following sequence:

Campers LOVE this and I almost ALWAYS include something like it at the end of a boot camp!

In summary, kettlebell boot camp workouts are a great way to lose fat, build total body conditioning and get into fantastic shape … but there are some specific considerations that can make all the difference when you’re putting one together.  I hope the kettlebell boot camp exercise ideas in this article help you get better results and reach your ultimate fitness goals faster and more effectively!

Thanks for reading, and talk soon –

PS – Signed up for my KB email newsletter yet? You’ll get a free copy of my Beginner’s Guide to Kettlebell Training when you do – just drop your name and email into the box at the upper right of the page to get signed up now!!

Cool new promo for the Kettlebell Basics Premium Workout Series … this video’ll give you a glimpse of what’s inside the mega-bundle:

For more info about the Kettlebell Basics Premium Workout Series, click the link below:

At my Sacramento, CA kettlebell boot camp classes, 90% if the time we end with a ‘finisher’ – a conditioning-based, circuit-style sequence that leaves you feeling, well, smoked.

In yesterday’s boot camp, the finisher was particularly tough … folks seemed to “enjoy” it 🙂 … so I thought I’d shoot a quick demo video of the workout and share it with you to enjoy as well.

Watch the kettlebell press, squat, and conditioning ladder below:

Thanks for reading and talk soon –

P.S. If you liked this workout, you’ll love my Kettlebell Basics Premium Workout Series – click the link below for more details: 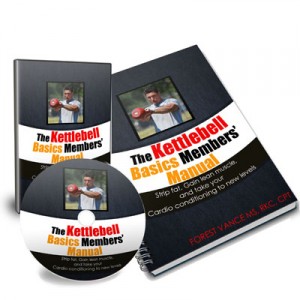